Today's post will be a DIY which I'm quite excited about! It was really fun and simple to do and only took one hour at most. It actually looks really cute on a shelve as a decoration or you can even give it to someone as a gift! 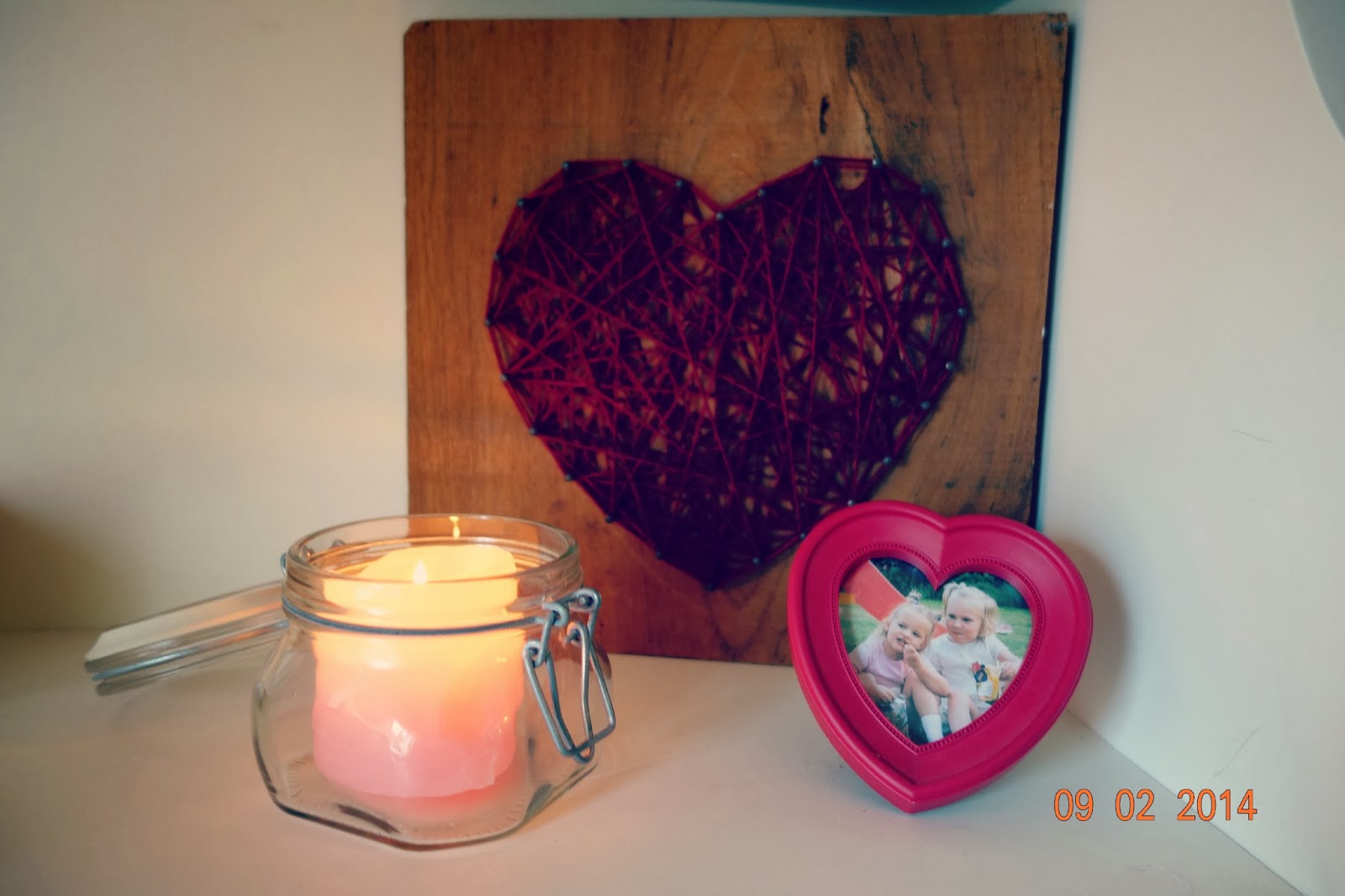 So the things you will need are: 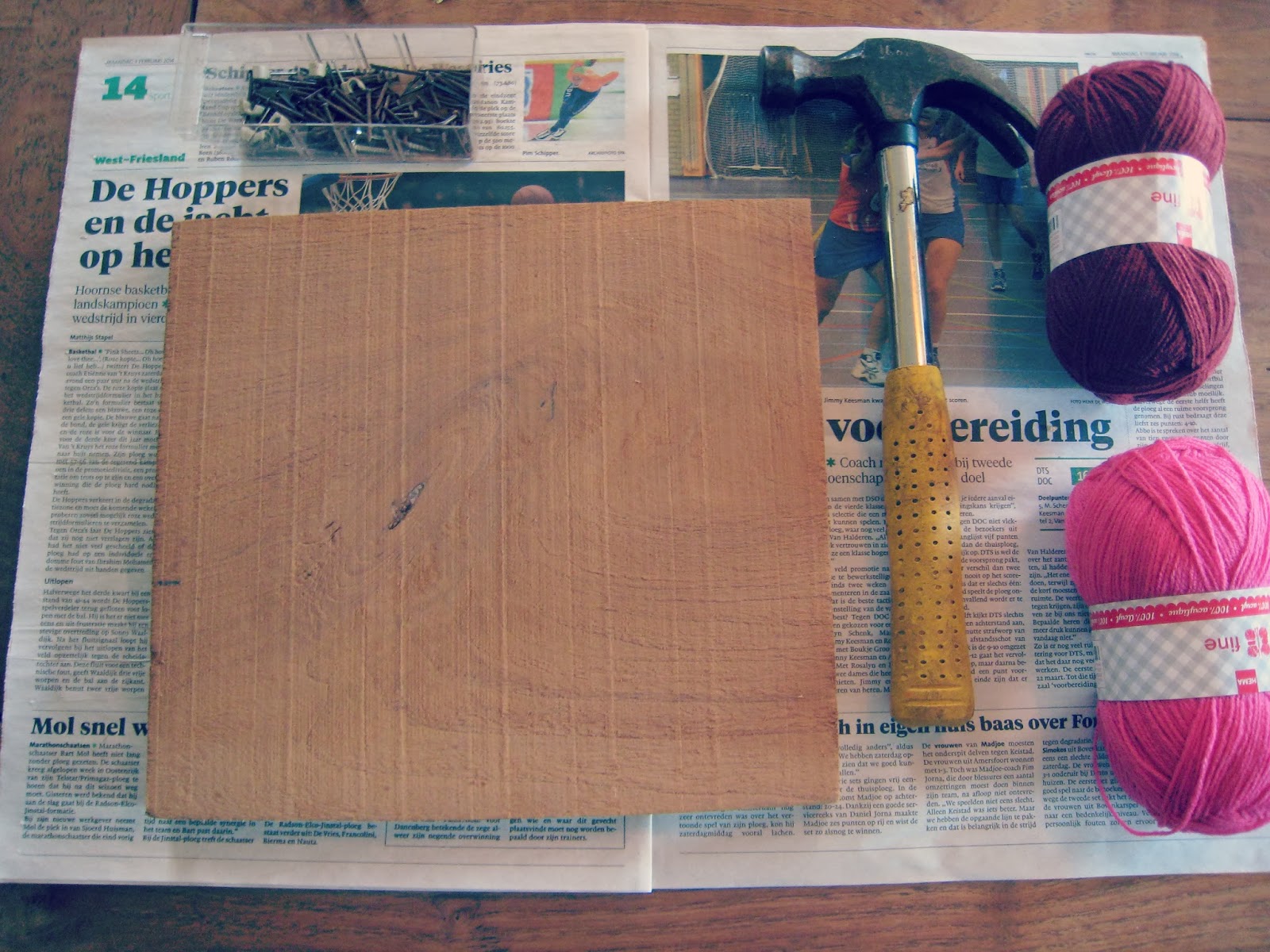 Start with cutting the shape you want to make out of paper so you have a stencil.
Then place it onto the wood. The best thing to do is to tape the stencil to the wood so it won't move. 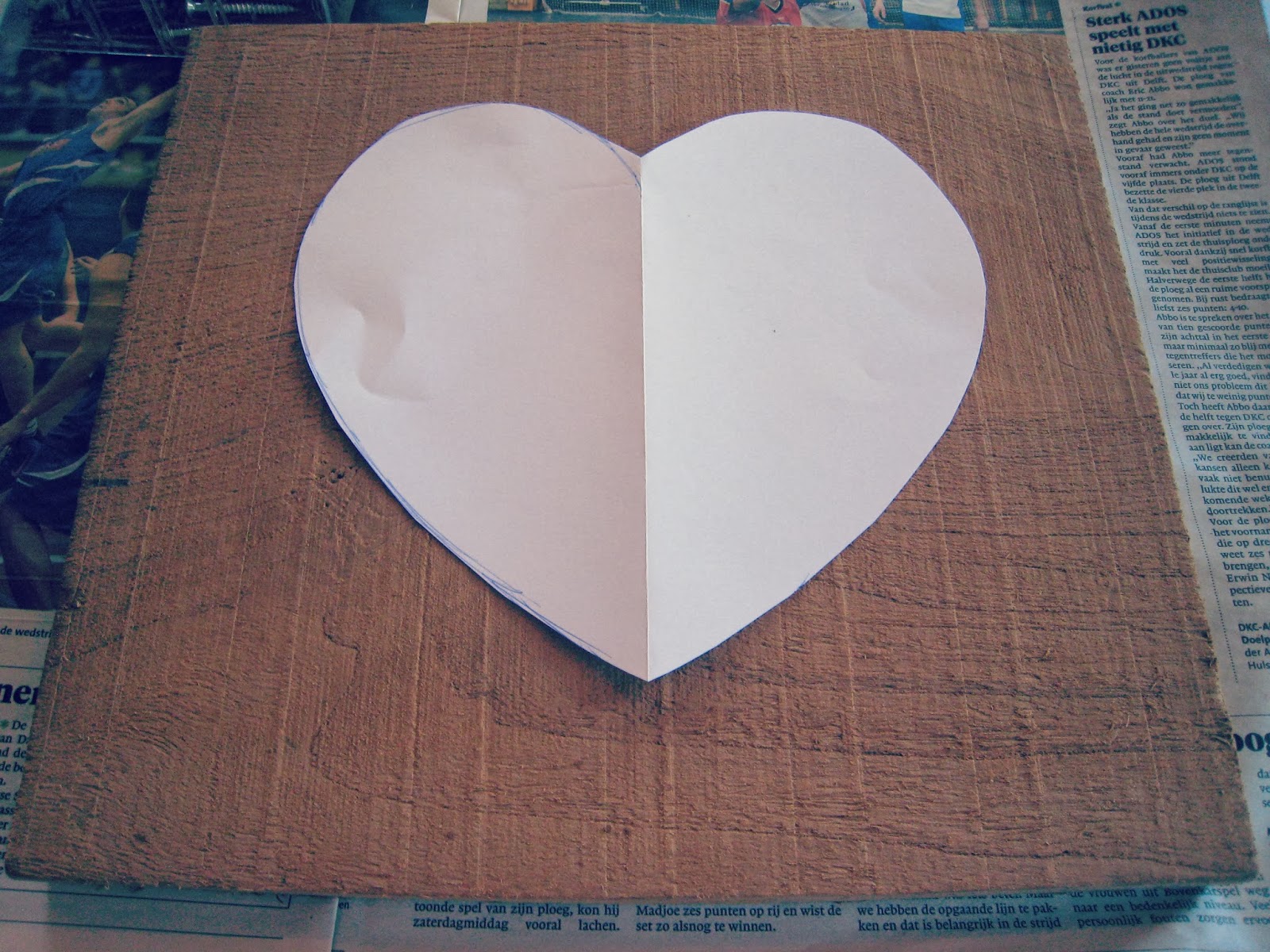 Then start hitting the nails into the wood with your hammer. Place the nails about two centimeters apart from each other. And once you're done remove the stencil. 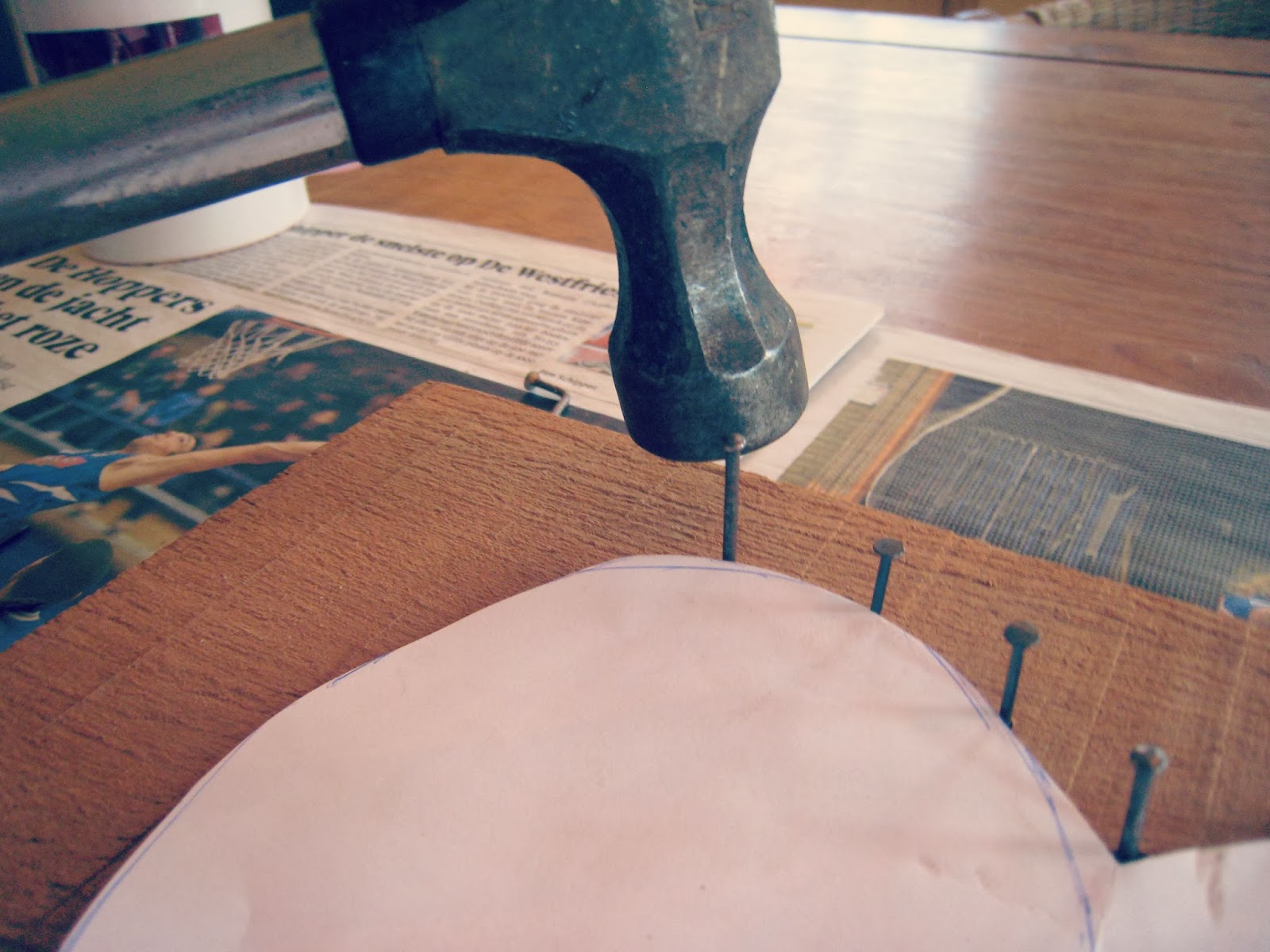 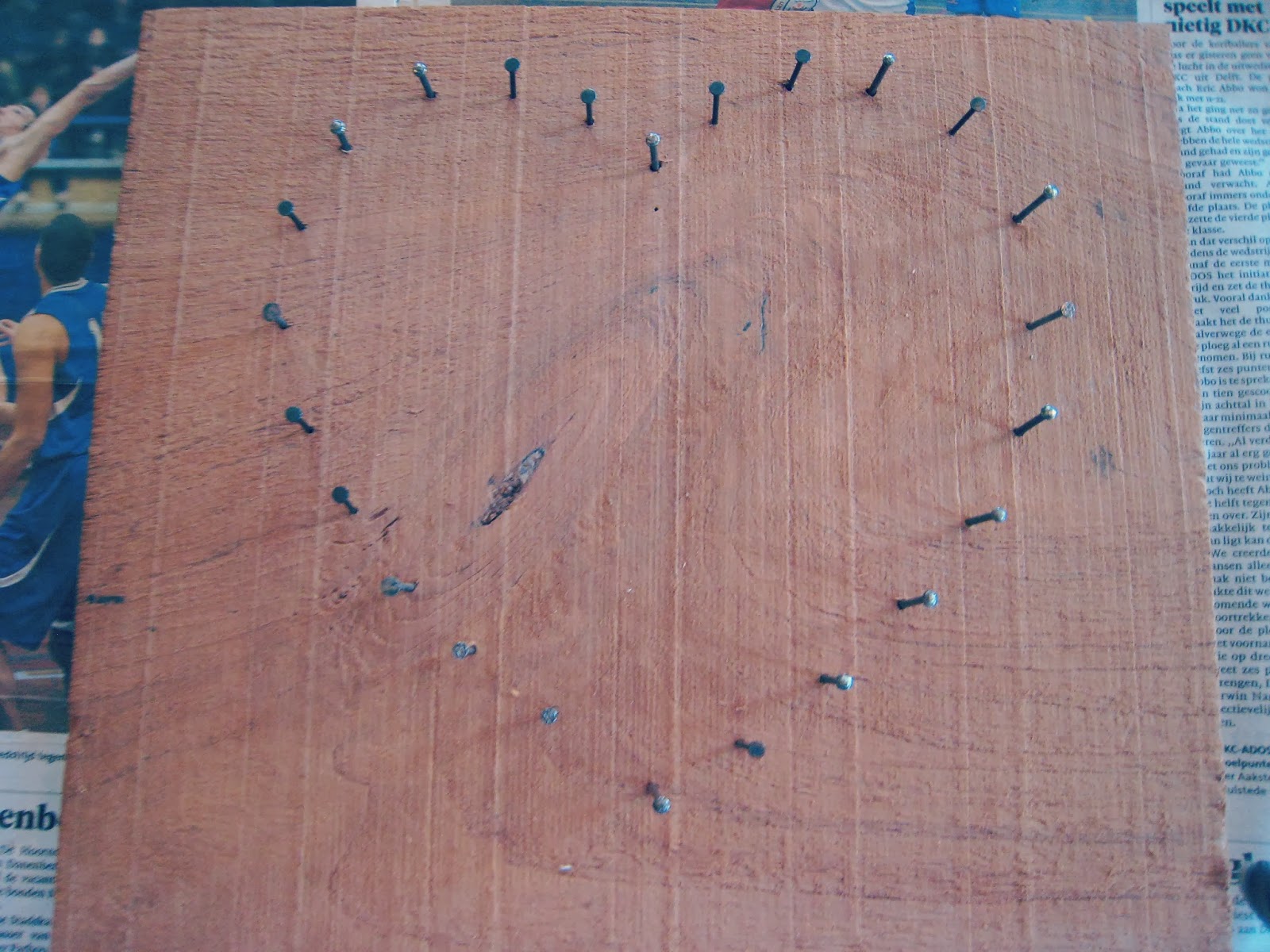 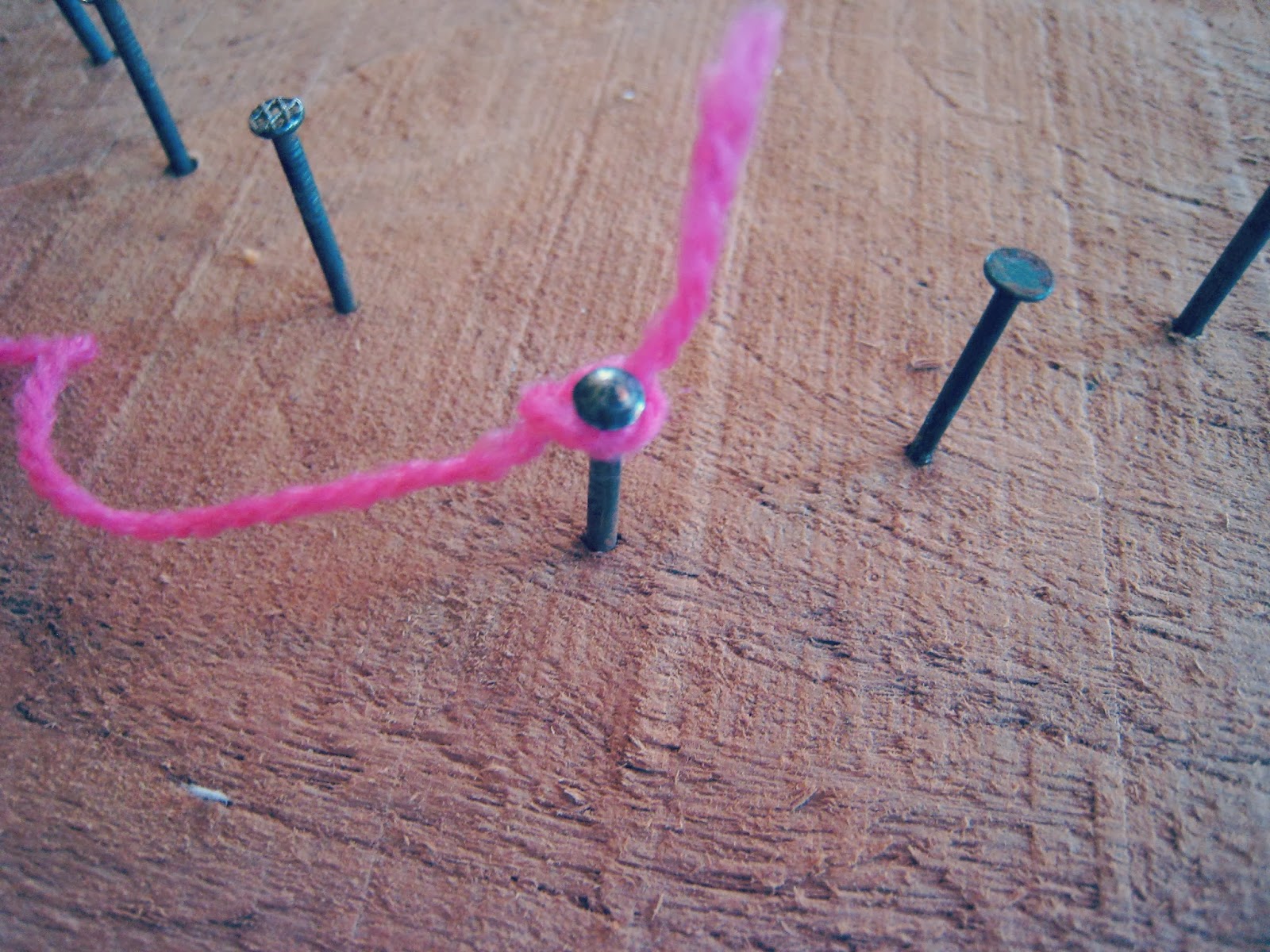 Tie the end of your yarn to one of the nails. I chose the bottom one because that's the best to start with.
Then go around all the nials randomly with your yarn until you have done all of them. Keep on tying the yarn to the nails but make sure you eventually follow the line of your shape.
Then keep on doing that until you have something around three layers of yarn between every two nails. 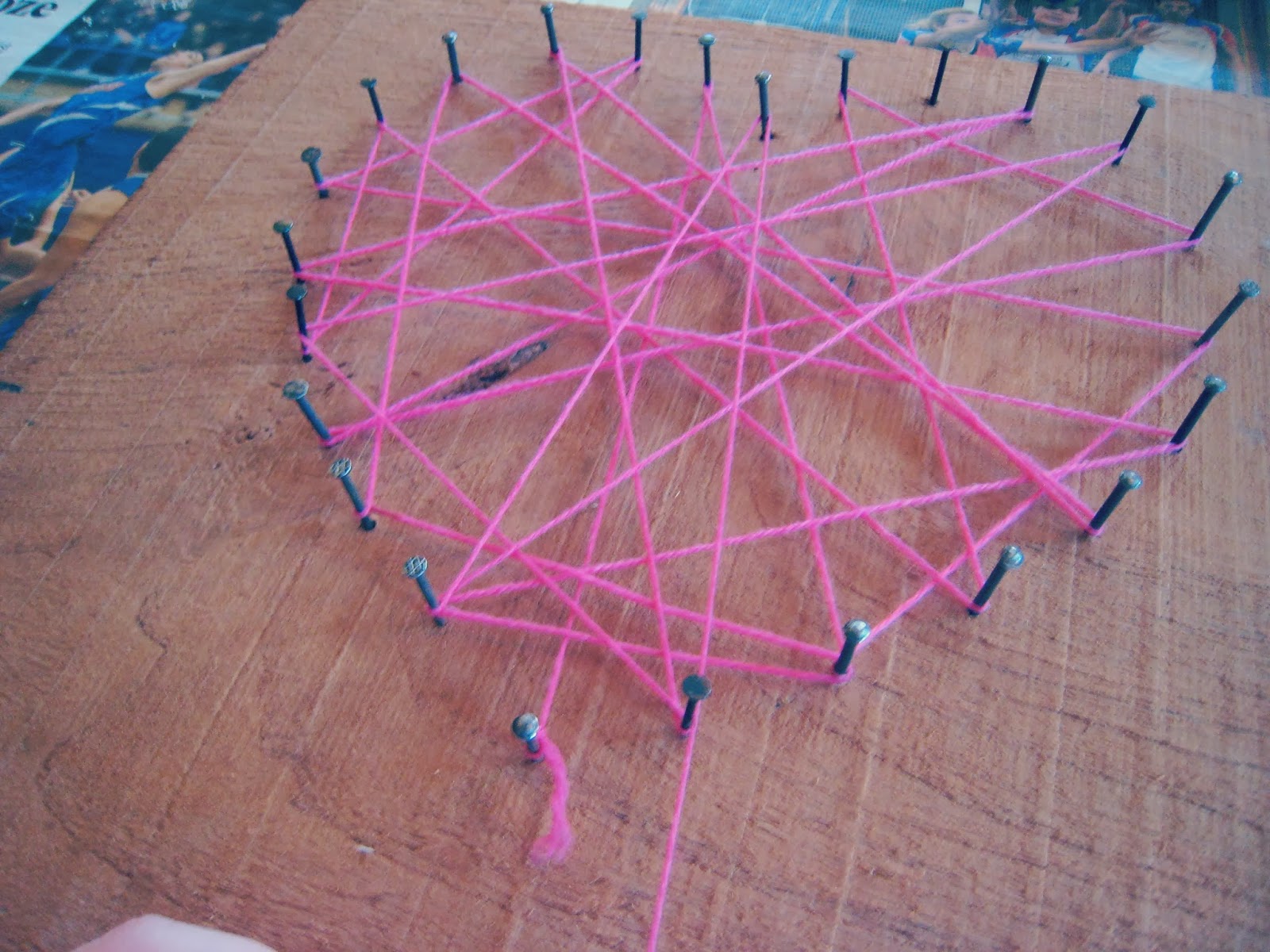 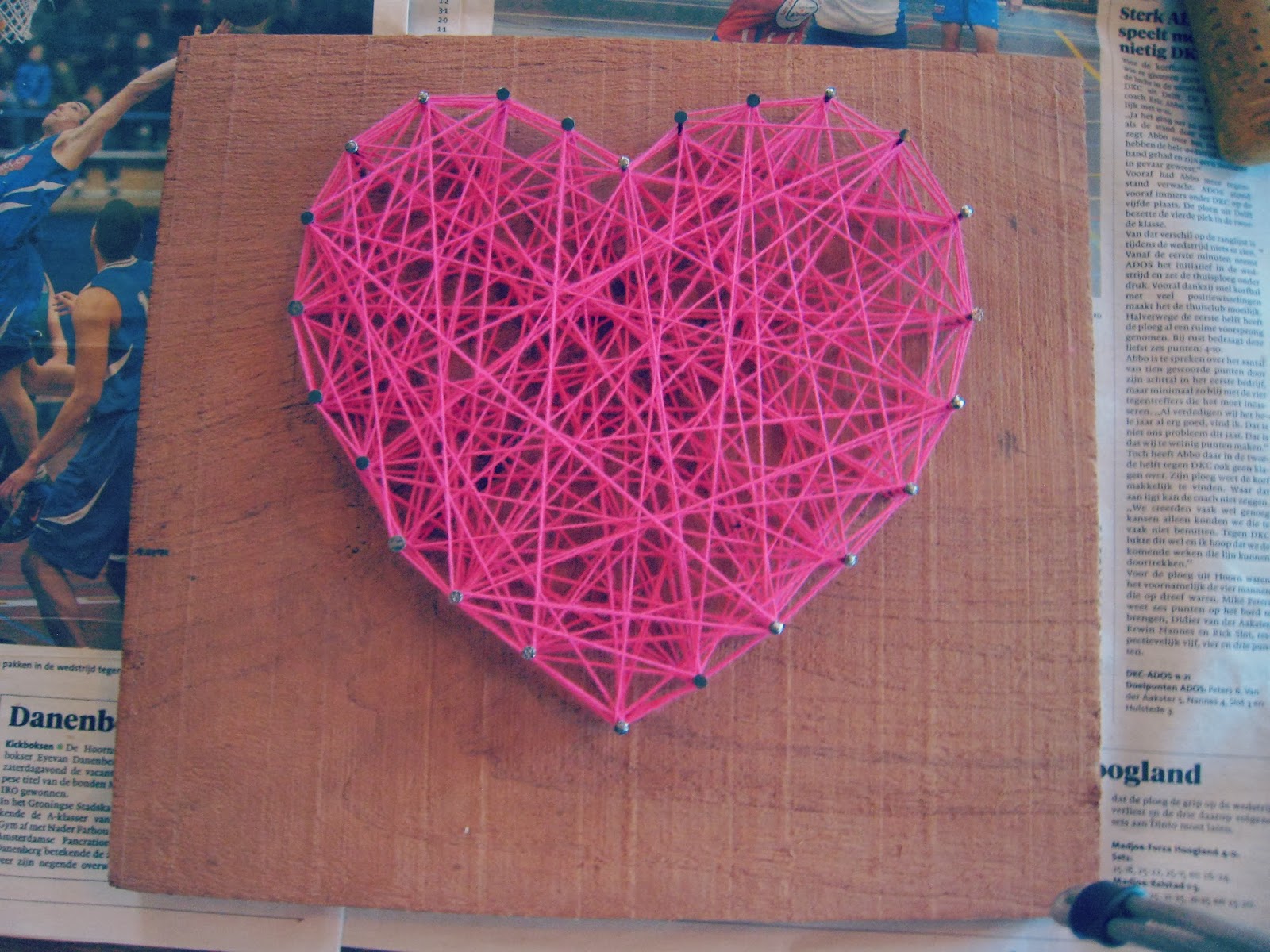 Today I have another outfit of the week for you! 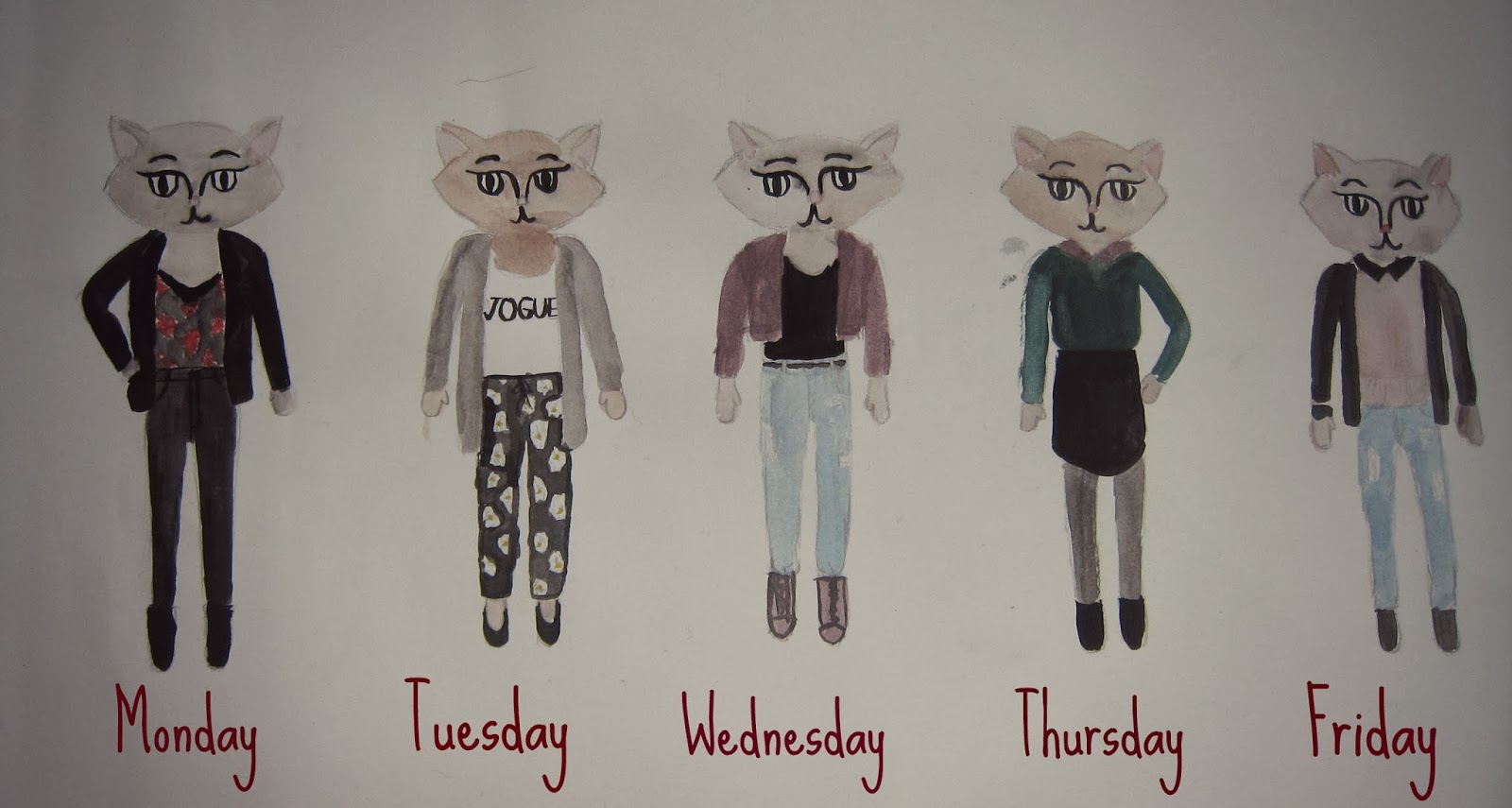 Monday: I wore a black blazer and jeans from H&M, a black top with chinese flower print from Primark and black boots from H&M aswell.
Tuesday: this day I wore my 'Vogue' shirt wich I got with the magazine, a fluffy grey cardigan from H&M, a pair of black flats from Primark and a vintage daisy pair of trousers.
Wednesday: I wore a plain black long-sleeve from Hema, a burgondy jacket from H&M, my burgondy Dr. Martin look-a-likes from H&M and a pair of jeans from Vero Moda.
Thursday: this day I wore a forest green sweater and a burgondy shirt both from New Yorker, a black skirt from Primark, a pair of black tights and my black boots from H&M.
Friday: I wore a baby pink peplum-ish top with black leather collar from Forever21, a black cardigan from Pimkie, my jeans from Vero Moda and a pair of black floral sneakers from Office.

I hope you all had a lovely week!
Lots of Love,
Rosa

As you may know I competed in a fashion designing competition last week and..... *drum rolls* I CAME IN SECOND PLACE!! out of 17 super talented designers. I am so honoured and surprised. It's quite a big deal for me. My prize is that I get to show some items at hollands biggest fashion fairs. Which is so cool!
The show was organized by a company called MAFB which means Music and Fashion Battle. They did a great job and the show was amazing! 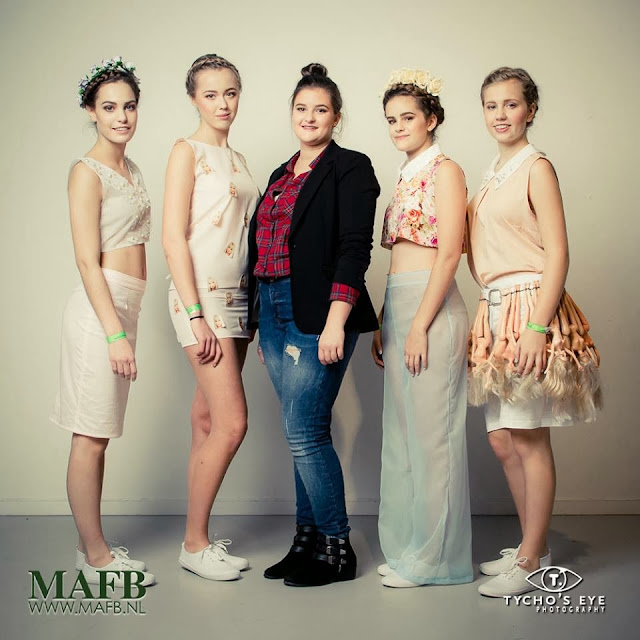 This is the overall result and I'm really proud of it! I made and sewed everything myself and I've never had any help in how to sew and stuff so I pretty much taught myself to do it. 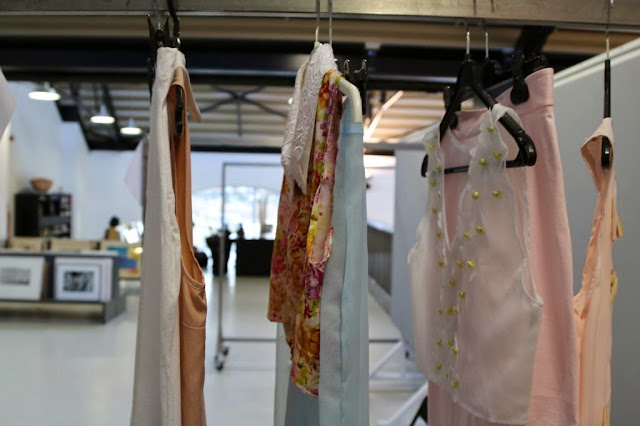 We were one of the first to arrive at the venue so we had the entire space to our selves to get the stuff together and ready. 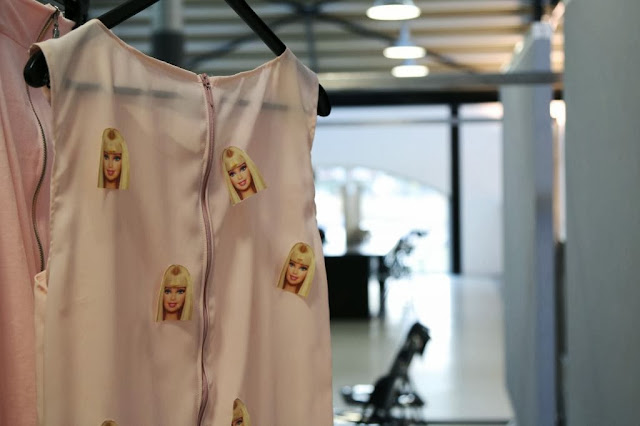 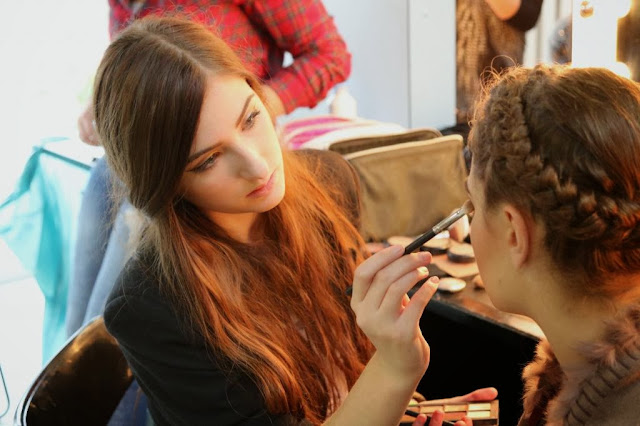 I asked Wies to do the make-up and she did a fabulous job. The models looked stunning!
She also has a blog so if you would like to check that out click here

I chose for a braid all around the head wich me and my sister (the model under here) did.
I thought it would look very lovely and girly, which it sertainly did. I'm still very happy with the results!
The other models were all friends of mine and not from model agency's or something like that.
I think they did a great job and I'm very thankfull that they showed my desings in such a lovely way. 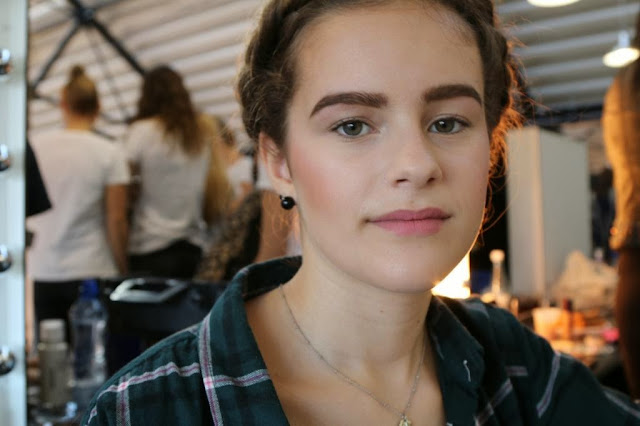 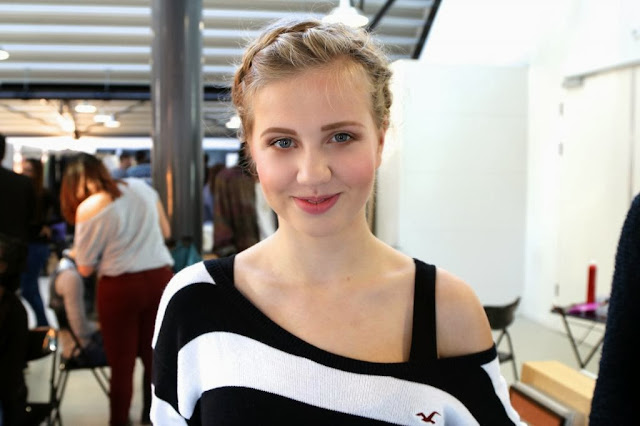 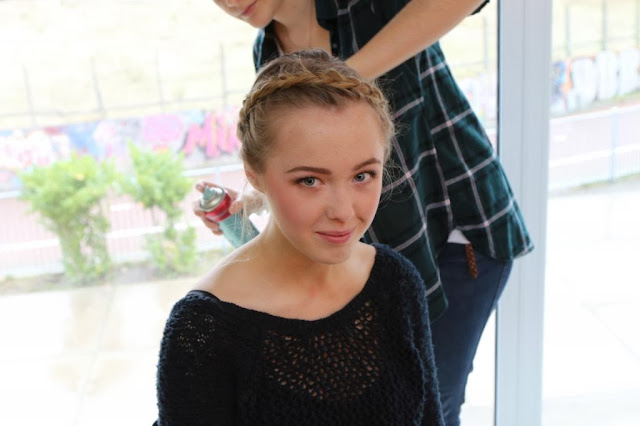 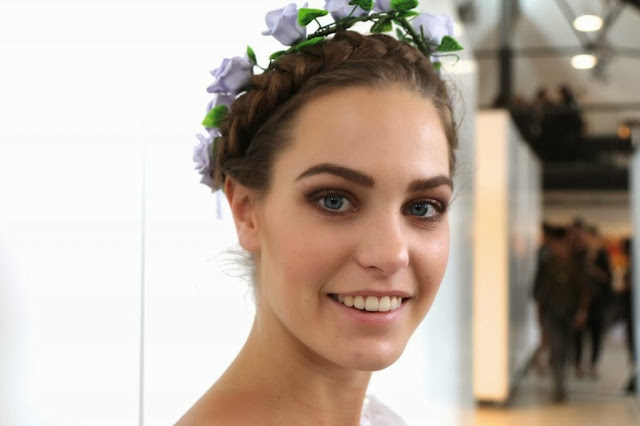 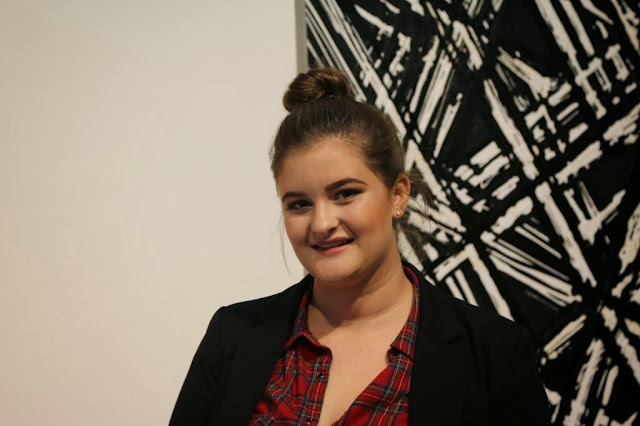 It was quite a mess backstage due tothe 17 designers and all of their models (max. 6 per designer) and their hair and make-up teams.
(and these pictures were made at the beginning of the day, imagine what it looked like at the end...) 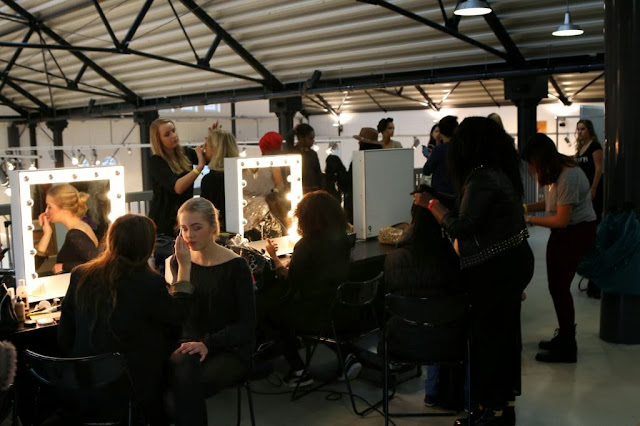 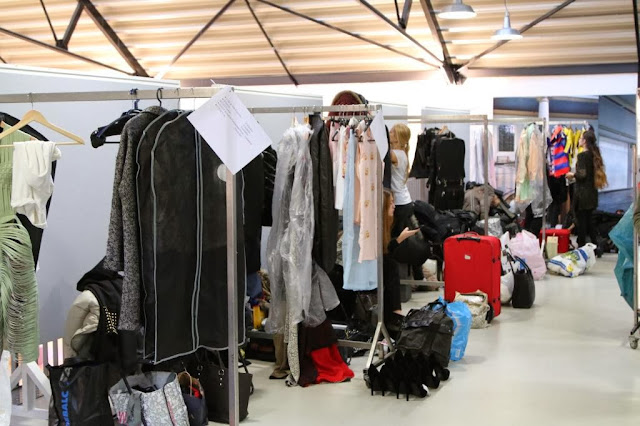 This is what the venue looked like. The show was held in the 'Centrum voor Beeldende Kunsten' in Amsterdam. I think it looked quite professional! (which the show was though)
I think something between 100 and 200 people fit in there, and the place was packed! 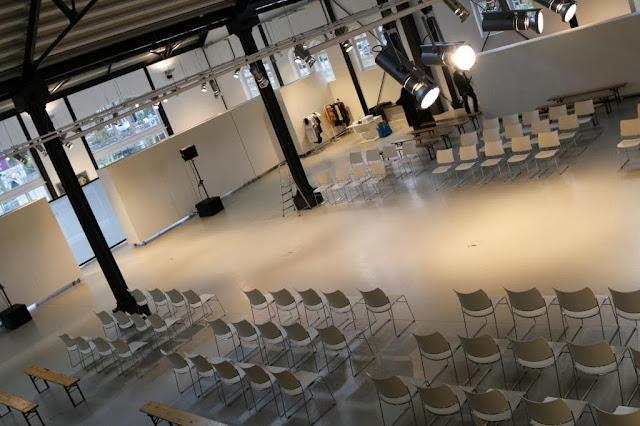 Well that was about it that I have for you today, more photos will follow as soon as possible!
I really enjoyed myself that day, and I still can't really believe I won...
(most of the pictures are made by Wies)

Have you ever been to a fashionshow?

I have something very exciting to tell. Some of you may already know it but I'm going to tell it anyway. This 'Big' thing has by the way also been the reason why I haven't posted anything for a while.

I have been selected to compeat in a fashion design competition with 17 other designers. I'm the youngest one and I have the least experience wich makes me a bit nervous but I am also really, really, excited!
We have to design and make four catwalk outfits. I've decided to go with a lot of pastel colours, flowers and some Barbie dolls. I'm not going to tell nor show you what it will look like because I want to keep it a surprise and I also haven't finished yet. I have chosen four friends who will be my models and they are going to show it on the 24th of November.

A few weeks ago, We (all the designers) were invited to follow a masterclass, where loads of interesting people told a lot of very usefull information. That was also the day we got to meet all of our 'rivals'. Every single one of them has soo much talent! And all of them are already studing at designing academics or art schools and stuff like that. And then there is me. The sixteen year old girl from the tiniest village ever who is still in High school and tought herself how to sew. I think this competition is going to be very interesting! haha. But this doesn't stop me to try as hard as I possibly can to reach the level of the others.

I'm working very hard every day to be finished by the 24th of Novermber, wich is already a challenge itself. But anyway hopefully I will reach my goals and end not as last.

Here are a few pictures to give you an idea where I'm talking about and here is the link to an interview (wich is in dutch, but you can translate it ;) )

Yesterday I went shopping and I went into a Creative-ish store. There was lots of stuff like DVD's, CD's, books ect. There was also a section where they had a lot of beads. I couldn't resist them they were all so cute! Sooo I bought some ofcourse, and that's why I am doing a DIY on bracelets. I will also do one on necklaces but I hadn't had time for that. So these are the tree bracelets I made. The 'How to' will be under every single bracelet! 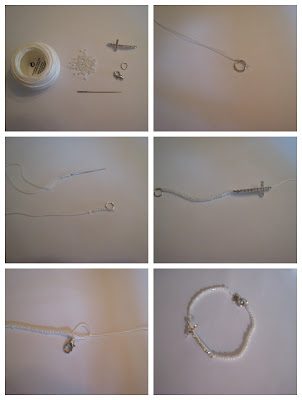 Take about 18cm of white wire and attach it to the little ringlet. Then put the wire through the needle's eye. Now slide half of the white beads onto the needle and onto the wire. When you're halfway put the silver cross on. Then slide on the other half of the beads. Now tie the closure onto the wire. And there you have you're Silver Cross Bracelet! :) 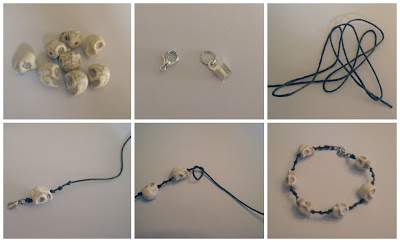 No. 2 Pirate Skull Bracelet
Supplies:
- Skull Beads (I prefered cream but you can take any color)
- a closure and ringlet
- brown or black wire/rope 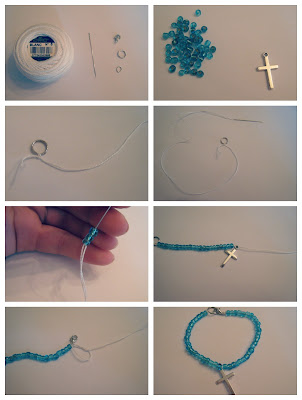 First tie the ringlet onto the wire. Then put the wire through the needle's eye and slide the blue beads onto it.
When you're halfway slide on the silver cross and the other half of the blue beads. Finally tie the closure onto the wire and That is you're Blue Cross bracelet!

I hope you liked this DIY! If you have any other DIY suggestions feel free to comment them below. I will do a Necklace one soon. If you have any improvements about my posts please comment too. I'd like to know kow you feel about them and how I can make them better :)

So today I thought I'd share with you my wishlist! I have seen these items flowing by a couple of times and I really love them! So I will tell something about them in order from left to right and top to bottom. 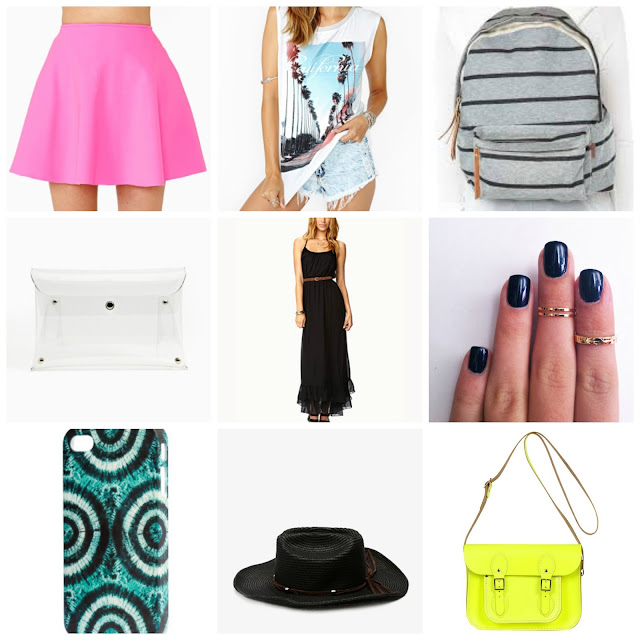 So that was my wishlist! I hope you liked this post and I will see you very soon! :)

A Touch Of Rosa

Hello! I'm Rosa and I am an 18 year old girls who loves fashion, beauty and travelling. I am now in my last year of High School and wish to get accepted at Central St. Martins in London next year. On this blog I will try to post as often as possible. Have a great day! :)
Twitter and Instagram:
atouchofrosa